After getting the shot “Milken Em” that I wanted in Grand Tetons last July (the Milky Way shooting above the Tetons with Jackson Lake in the foreground that has been on my site for the past year), I set out to get something better with a reflection of the Milky Way in a lake. This was my first year to the High Sierras and on a previous trip in June, I went to the Cottonwood Lakes and was able to take a great shot of the Milky Way reflecting in Cottonwood Lake Number 3. There was a little bit of wind the second night out, so the water had a few waves to it and didn’t make for the cleanest of reflections. I knew I could capture something a bit better. 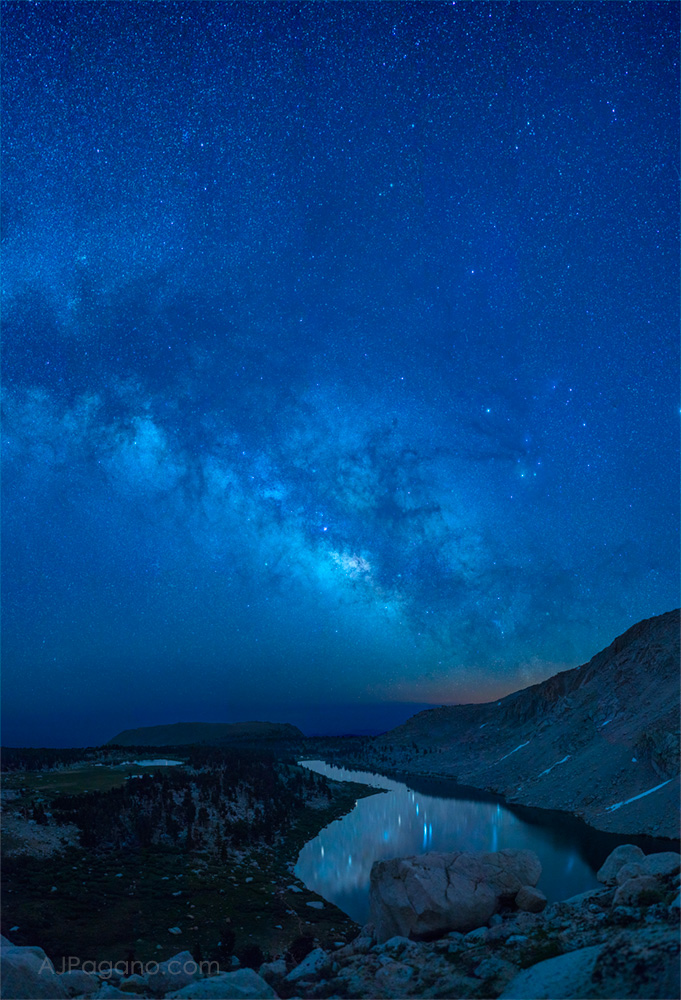 The next morning I took off out of Cottonwoods and headed back to the car – 6.5 miles. On my way out my feet were killing me. I got home for a couple of days, both of my big toes were numb, but the numbness totally past after a couple of weeks. But of course I didn’t give that too much thought. I just wanted to get back out into the mountains.

So I set out at the end of July to start out at Onion Valley trailhead and get into some of the Sequoia and Kings Canyon National Park backcountry with the hopes of getting near an alpine lake that had some ridges around it to block out some of the wind. On my way up I met up with a couple of guys that I befriended on the trail – Mike and John – and headed over Kearsarge Pass. Kearsarge Pass is one of the most breathtaking vistas I have seen and that’s not just because I was at 11,800 feet in thin air, but because of the view of the peaks of the High Sierras – one right after another like huge saw teeth lined up to cut the clouds as the pass over them.

We camped the second night in the Kearsarge Basin and I captured some cool shots that I will post on the site and social media over the coming months. The shots of the Milky Way and the Kearsarge Pinnacles came out great. The problem that night is that I couldn’t get a proper reflection from the angle of the lake I was shooting, as well as there was a lot of wind on the large lakes where the angle would have worked.

On the third night, we camped at Charlotte Lake and it was breezy when we first arrived in the basin – even after sunset, but a couple hours later the wind calmed down. As everyone was settled in their tents – gassing it up after dinner, I took off around the lake to a spot I had scouted earlier in the evening and set up shop. After getting a couple of shots of panoramas that would be stitched into large prints, I knew that I had what I wanted. To the “T” of what you are looking at. 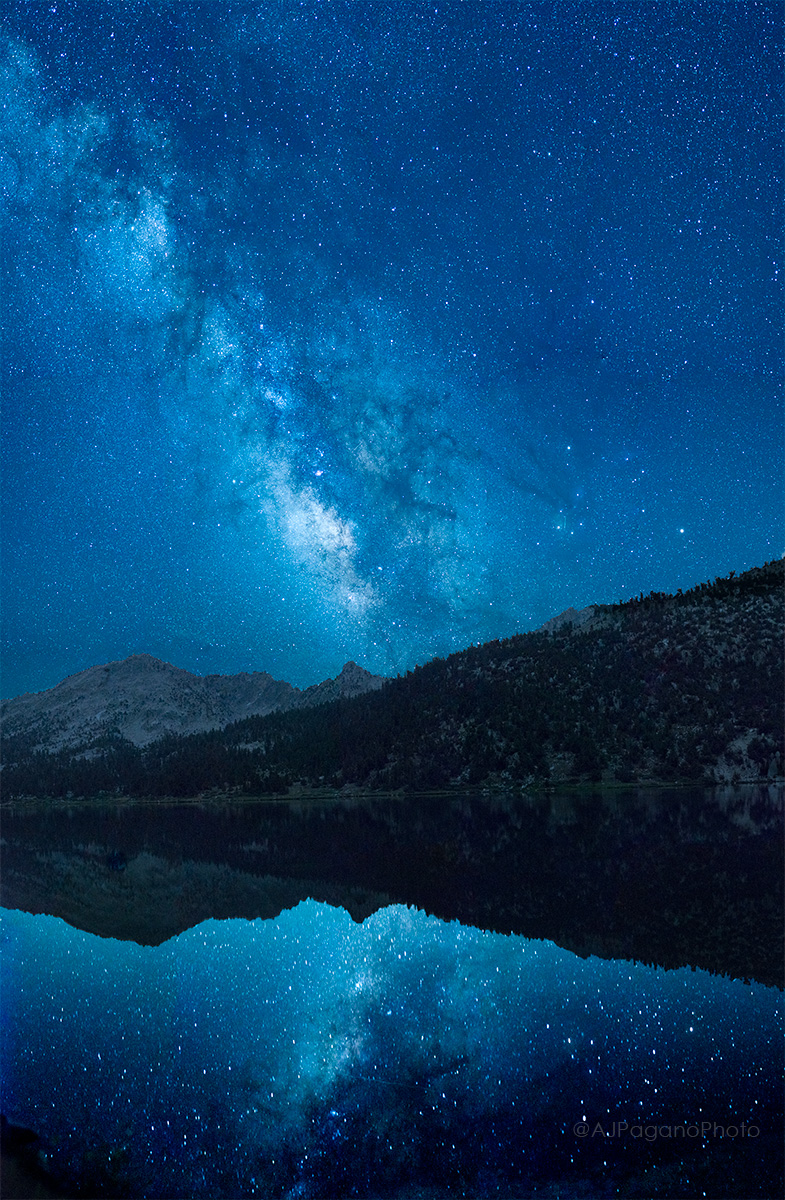 The next morning we broke camp and headed out of the basin and back up to the pass – 8 miles out in 4 hours (Can’t Hike 55’s doing!). I had the same sensation in my foot that I had in the Cottonwood Lakes of extreme pressure on the balls of my feet – no not between my legs – my feet – get your head out of my gutter. So I knew I was going to have some numbness, but nothing that would have lasted a month later. I even went to the podiatrist as soon as I got back to Vegas and got some inserts that will hopefully displace the pressure to somewhere else on my foot.

Milky Way season is almost over, so we’ll see over the course of the next couple of months what else I can get a shot of. Follow on social media to see what I have been up to, or come by the gallery and see me and what is up on the wall. I am always there for Preview Thursdays and First Fridays, as well as one day a week (check social media for specific days) and by appointment.

I am posting this photo and article on the National Park Services 100 year birthday – #NPS100. Over the past couple of years I have been taking advantage of where I live and what is out here in the western US. Ken Burns book and series titled it best – America’s Best Idea. This is one of the sickest shots I have taken and if it wasn’t for the Parks, this never would have happened. Support them and all wilderness areas. We will live a shittier and much more compromised life than we are already on the path of. The National Park and the Wilderness areas around us are all that is left of where we came from. Protect and grow them!