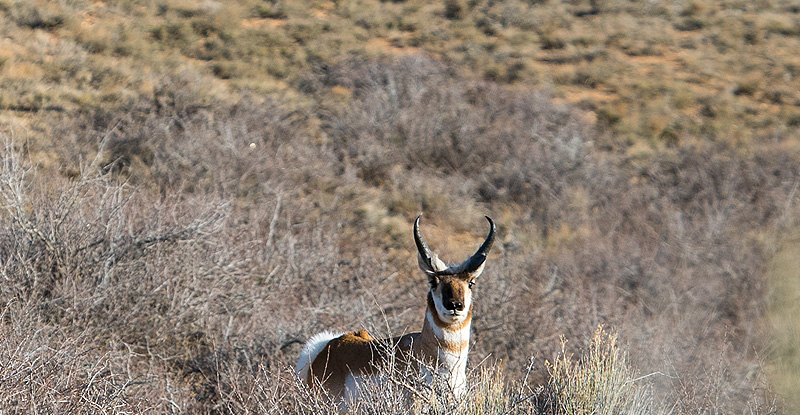 I recently visited Bryce Canyon National Park in Utah with the hopes of field testing the Sony a7s in a real setting, as well as getting some snowshoe time in before what little season was gone. The Sony was great, besides the sensor getting dirty fairly easy, it was silent, and I am back to manual focusing. I haven’t had to rely on manual focusing since junior college with a 35mm Minolta, so it is still a little bit of a challenge since picking up digital. But the a7s is full of helpful tools to get you focused with a Canon lens and Metabones’ IV adapter. So it was successful!…

I went up with my longest-time Vegas friend Michael “Oklahoma” Gilmore and we set out together after I had 12 hours up there by myself. Which is a good thing, because I need human interaction. Although he does fidget like a 3 year old who shit his pants in a baby seat in the back of a car, I was able to get some cool shots of pronghorn – which was a first for me to capture. He did spook them one time when he had to move the car to get a better view, rather than get out in the cold. But I do have to give him credit for going up there, because any of my other buddies were worried about the cold. I had another friend who gave me the inspiration to go up, but he stole Oklahoma’s diaper and stayed in this season. But the cold definitely is a benefit, because the air is clear and there wasn’t really anyone in the park.

For myself, I had seen pronghorn in the meadows on the east side of the High Schell Range of Ely, NV before, but it was at dusk and I was hauling ass to get to a campground before dark. So this first time to experience pronghorn up close and personal – and they do get close. They are the fastest animal in the Northern/Western Hemisphere and they know it. They are extremely curious, so they’ll come right up to you and check you out. And sure enough, there was no shutter going off, so my first morning there was great (as you can see from the photo above)!

In regards to any landscape shots, it was a little difficult. The weather wasn’t too favorable for clouds and the moon was around, nor big enough when it was, to light up the landscape. Regardless, there is a plenty of room for improvement on the next trip up there. There wasn’t any snow, except for the north slopes in the canyon, so we got to get out and stretch our legs just one day with the snowshoes. This winter has been pretty harsh (yes… it is a fact!) with very little snow fall out west, so besides not giving in to my selfish interests of snowshoeing, the drought seems to be only getting worse.

I was able to get my first photo with using some foreground light from my headlamp on the Natural Bridge towards the end of the main road in Bryce. I’ll link to the photo at a later time from this article. I had a few other shots, but over exposed them, or under exposed them with the headlamp.

In conclusion, it was a good time, even though we had to cut it short, because a snow storm did actually come into the area and dump a few inches of snow. I look forward to getting back up there. It is only a four hour trek from Las Vegas and you get to see some incredible Southern Utah scenery on the way. We’ll probably get into the back country next time and I’ll plan it so I have some great landscape shots. Thanks for reading!